“Once a stutterer, I feel, always a stutterer,” Emily Blunt tells Marie Claire magazine about her years growing up with...

Emily Blunt kept quiet about her split from singer fiancé Michael Buble for weeks because she was too embarrassed to...

Why Emily Blunt refused to do it with Russell Brand

It seems Russell Brand’s talent for getting women into bed – on and off screen – has its limits. The...

Amazon has snapped up North American rights to an Emily Blunt-fronted western from the BBC, Variety has learned. The streaming...

In a candid conversation with the son of former Marie Claire Editor-in-Chief Anne Fulenwider, Blunt opens up about the profound...

Emily Blunt Is Back in A Quiet Place: Part II First Look:...

Emily Blunt is back — and as silent as ever. The first-look teaser for A Quiet Place: Part II debuted... 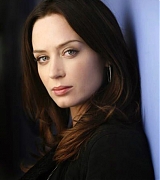 The British actress’ royal turn as ‘The Young Victoria’ leaves her marveling at the power of love.

The diamond ring on Emily Blunt’s finger is so blinding, it appears she might have ransacked the Crown Jewels during her recent stint playing the teenage queen of England in her new movie “The Young Victoria.”

Wearing a skin-tight, black Roland Mouret mini-dress, long hair loose around her shoulders, Blunt, 26, described by her colleagues as “warm, friendly, funny and down-to-earth” enters the lounge of the Four Seasons Hotel looking cool and glamorous, more ’60s Mod than 19th century empress. It turns out her ring doesn’t come from the royal stash in the Tower of London, but courtesy of boyfriend John Krasinski (NBC’s “The Office”), who just asked her to marry him.

“What really resonated with me was how wonderful that commitment that they had to each other was, and how important that is,” the newly engaged Blunt says of Victoria and Albert, the famous royal couple who married in 1840 and loved each other ferociously. When Albert died suddenly at age 42, broken-hearted Victoria put on black to mourn him, never took it off and went on to become England’s longest-serving monarch at 63 years and seven months. “People quit on jobs. They quit on marriages. They quit on school. There’s an immediacy of this day and age that doesn’t lend itself to being committed to anything.”Blunt doesn’t like to discuss her personal life, but it doesn’t take much imagination to suspect Victoria’s relationship with Albert might have inspired Blunt to make a similar personal commitment. “There was something really selfless about the way they loved each other,” she says. “It was beautiful.”

The period drama, directed by Jean-Marc Vallée and written by Oscar-winner Julian Fellowes (“Gosford Park”), is essentially a love story. The drama swirls around Victoria, who suffers through a lonely and controlled childhood, gains the resilience to triumph over some serious family dysfunction and finally claims the independence — and the crown — that is rightfully hers at 18. Once she became queen, Victoria made some reckless decisions. “But then Albert came and he very much was like an angel for her,” Blunt says. “Her greatest achievement, by far, was marrying him, was finding him.”

The script captures the awkwardness and vulnerability of being in love at such a young age. One of the more humorous and poignant moments comes when Albert wants to propose to Victoria, but he is not allowed to because she is the sovereign. “It wasn’t easy for him,” says Rupert Friend, who plays the handsome German prince. “It’s not like as a man you go, ‘Yeah, sure, I’ll be second fiddle to a woman. And I’ll give up the right to rule my country and come and never rule yours.’ He could easily have said, ‘I’m a man, you’ll do what I say,’ ” Friend says. “But that wouldn’t work either. They both have to swallow their pride.”

Blunt and Friend hadn’t met before making this film, but they developed a close friendship on set. “We had a real laugh doing it,” Blunt says. “There’s a scene where we’re in the rain, and we’ve been riding. And I run up and I jump on him and he hugs me and we take off running and he falls,” she says. “He actually slipped on a cow pat. I think pee came out of me I was laughing so hard.”

“We were all on this mission to make it beautiful, romantic, sharp,” Vallée, the film’s director, says, “to portray this world in a meticulous way and be playful.”

Corseted up to her eyeballs, Blunt says she tried to find moments to let her character breathe, whether it was wrestling with a puppy or slumping back in a chair. She worried about coming off as too arch or stiff, and strived to avoid being swallowed up by the formality of the dialogue or the grandeur of the sets, many of which were real palaces like Blenheim (which stands in for Buckingham Palace) and Arundel Castle.

“It — blows — your — mind,” Blunt says, of working in such beautiful locations. “You cannot believe you’re walking down these corridors and there’s Van Dycks on the wall. It’s insane.”

Blunt’s next film is “The Wolfman,” with Benicio Del Toro and Anthony Hopkins. After that, she puts a tiara back on to play a very small part, literally, as a Lilliputian princess opposite Jack Black in “Gulliver’s Travels.” “We actually filmed some of ‘Gulliver’s Travels’ at Blenheim [Palace],” Blunt says, before dissolving into laughter. “I was like . . .” her voice deepens with mirth, “this old place? I’ve lived here. I own this place.”

Emily Blunt takes a royal turn in The Young Victoria

Emily Blunt Recalls Her Days in a Girl...

How Emily Blunt’s Stutter Led Her to a...

This website uses cookies to improve your experience. We'll assume you're ok with this, but you can opt-out if you wish. Accept Read More