Since her scene-stealing breakthrough in The Devil Wears Prada, back in 2006, EMILY BLUNT has taken on blockbuster roles as varied as Mary Poppins, a suffering divorcee in The Girl on the Train and a survivalist mother in A Quiet Place. But, despite her stellar résumé, she remains remarkably ‘un-Hollywood’. Here, the British actor talks to KATIE BERRINGTON about her latest project – Western miniseries The English – her reputation as one of the nicest people in the industry, and learning to care less about perception – particularly when it comes to parenthood

Emily Blunt is returning to the rhythm of her home routine: “Falling back into what I love, which is the school run, pottering around, and the school run again.” We’re speaking at the turning point between the “two extremes” of her life – either immersed in a project on location (she wrapped a movie in Atlanta a few days ago) or at home with her family in New York, not missing a pick-up or drop-off. “I haven’t pottered for a while and I’m liking that,” she says, sitting in an office surrounded by books. “Or cooked or baked or done anything that brings me some kind of, you know, soulful joy.” 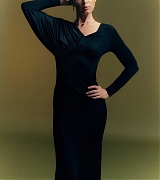 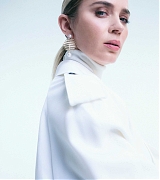 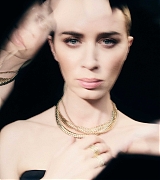 This might explain why she is radiating such a serene energy today – although Blunt has the air of someone who is rarely ruffled, despite insisting with glee that her house is a zoo. “Life is good, really good.” At this point in her career, she feels grateful to have the space and opportunity to explore “what works for me in an artistic sense – and allows me to balance being a mum as well”. Blunt, who was born and raised in south-west London, now lives in New York with her husband, fellow actor and director John Krasinski, and their two daughters, Violet and Hazel. “It’s the juggle – especially when your kids are as young as mine.”

After two decades in the industry, this point has been reached via an assorted portfolio of roles, spanning a stern, returned Mary Poppins (“I liked the challenge and was simultaneously terrified”), a delectably scathing fashion assistant in The Devil Wears Prada (her major breakthrough and a fast-track style education for the actor, who at the time “dressed like a teenage boy”, she says), a young Queen Victoria, a woeful divorcee suffering from alcoholism in The Girl On The Train, a survivalist mother in the post-apocalyptic A Quiet Place (directed by Krasinski) and a sci-fi war hero in Edge of Tomorrow.

Next up is Western miniseries The English, in which she plays an Englishwoman who arrives in the 19th-century Wild West seeking revenge for the death of her son. She crosses paths with Eli (Chaske Spencer), an ex-cavalry scout and member of the Pawnee Nation by birth, when he saves her life, and the pair embark on a journey of myriad discovery.

The nature of her character, Cornelia, as a force to be reckoned with, in a genre where women fall mercilessly foul of male brutality, was a huge draw. “I do love that she shows up like Alice in the Wild West and that she looks the image of the feminine ‘ideal’. And yet, there’s this fever in her for revenge,” she says. “She looks so out of place in this toxic, rather masculine landscape that she arrives in.”

“Just write me as you would a MAN: fallible and complex and difficult and shady… We are STILL having to remind people to not hold WOMEN to a certain ideal”

The landscape for women in the industry has shifted dramatically since Blunt started out. She recalls telling a writer, years ago, “Write me like a guy and I’ll do the ‘girl’ stuff. Just write me as you would a man: fallible and complex and difficult and shady.” But there’s a long way to go – “And we are still having to remind people to not hold women to a certain ideal.”

Given the present tumultuous times, the themes of trauma and of loss, of justice and accountability in The English feel particularly resonant. “The trick is to smuggle [them] in under the guise of something entertaining,” Blunt considers of the reflections that underpin the series. “That’s our hope with this show, that it sits you down at the end, that it creeps up on you – how much blood there is on the ground of a country.”

It’s a genre that she has always wanted to tap into, “because the backdrop is so potent”. She was thrilled to learn to horse-ride during lockdown for the role: “You realize in a Western that you really have to ride.” Her other lockdown pursuit was purely for fun: teaching herself the ukulele, which she gave up after three months, and a repertoire of Somewhere Over The Rainbow. “More of a fad than a passion,” she declares.

The movie she’s just wrapped in Atlanta is the David Yates-directed Pain Hustlers, alongside Chris Evans, Andy Garcia and Catherine O’Hara, and it’s a departure from her more typical ‘honorable’ roles. Amid the opioid crisis, Blunt plays a single mother who is “pulled into this intoxicating world of selling pharmaceuticals, [exploring] how long you [might] dance with the devil to further your own needs. I hadn’t really done that ­– played someone as shady as that before,” she says. “The pace of it would keep me up at night.”

Her penchant for playing shady characters is particularly noteworthy given that Blunt is famously considered one of the nicest and most down-to-earth people in the industry, despite the factors that anoint her Hollywood royalty: the roster of blockbusters and cult classics she has helmed; several awards-season nods; and even a cinematic Lake Como wedding, in a villa loaned to Blunt and Krasinski by George Clooney. And yet, Blunt appears quite ‘un-Hollywood’.

How does she feel about the reputation that precedes her? “Look, I’m a great believer that people reveal the best versions of themselves when you are warm and loving and positive. And then the environment is better, and I don’t work well in toxic, tense environments. I can’t do it,” she shakes her head. “But I was telling my friend yesterday, there was one day on the set [of Pain Hustlers] where I was just exhausted, which I never admit to. But there was a day where I was quiet; I wasn’t like Mary Sunshine, because I was having to conserve whatever I had left in the tank for this scene. And it was interesting how people were unsettled by this, you know?!”

It’s quite difficult to offend her, she says. “I love [people’s] strange idiosyncrasies and nuances – and what makes them tick. Even the tricky ones I take as an interesting challenge, so I don’t think I sweat the small stuff.”

The English will be the first time Blunt gets a producer credit, having been involved since its “embryonic stages”; she’s “been around the block long enough to be seeking interest in the whole tapestry” of a project now. But she’s not sure if writing or directing are on the cards. “I love to play around with things, [but] I don’t think I can birth a scene from scratch. We’ll see, time will tell. Like, I don’t know if I can do what John does. But I do love a tinker.”

There’s no grand, overarching plan for how she imagines her career evolving. “I like that leap into the great unknown,” she says. “I’m still on a bit of a voyage of discovery with it all, and I would like to not figure out my full capacity yet, so that I’m just led by falling in love with things.”

She hopes to help her daughters, aged eight and five, find things that bring them equal joy and fervor. “I want them to grow up wanting something, feeling passionate about something, and being proud of who they are. And I think a lot of that is just finding something you love to do… I didn’t grow up with a burning ambition to be an actress at all, it just revealed itself to me – and I think that’s wonderful when it happens like that.”

“It is interesting that WOMEN are still made to FEEL defensive of their choices to work, and MEN are not”

I wonder whether working in the same industry as her husband – occasionally on the same projects – brings gender disparities more starkly into light, within their field and beyond. “Oh, hugely,” she says. “I talk about this at great lengths with my girlfriends, with my husband, with all my friends… How much of it is genetic, how much of it is societal, how much of it is historical, how much of it is biological.” She takes a pause. “I don’t know why, when your kids call out in the night, they’re usually calling for Mummy,” she contemplates. “And you know that. That’s symbolic of, like, everything a mother feels when they want to have a career as well as being there and being available. And that’s what weighs you down with guilt sometimes.”

“It is interesting that women are still made to feel defensive of their choices to work, and men are not,” she continues. “When I was on set in Atlanta, which was challenging because I was racing back home every weekend – and then the kids would come to me for five, six days – it was amazing how many people asked where my kids were. I thought, ‘I bet Chris Evans isn’t being asked that question, or Andy Garcia, or Jay Duplass.’ And you just normalize it… but I find myself overexplaining or compensating to appear like, ‘I can still do everything and I’m still available.’ It’s that awareness of perception, maybe.”

She largely avoids the “intoxicating” but “slippery slope” of social media, having a private Instagram account with about 20 followers. In fact, she often takes to burying her phone under mountains of clothes and “leaving it for half a day – [because] it really helps me to just see it buried and disappeared from my life”. This, along with a daily transcendental meditation, comprises her self-care routine: “Staring out of windows, meditating, and burying my phone under piles of sweaters.”

Whatever her ritual, it must be working, because Blunt seems as positive and level-headed as her reputation foretold. “You should see my journals,” she refutes with a smile. “They’re so dark.”

The English is out now on BBC2 and Amazon Prime Video

From the first time she walked the red carpet to the last time she met one of her heroes (Jane Fonda), Emily Blunt shares some of her most memorable ‘first-time’ moments… 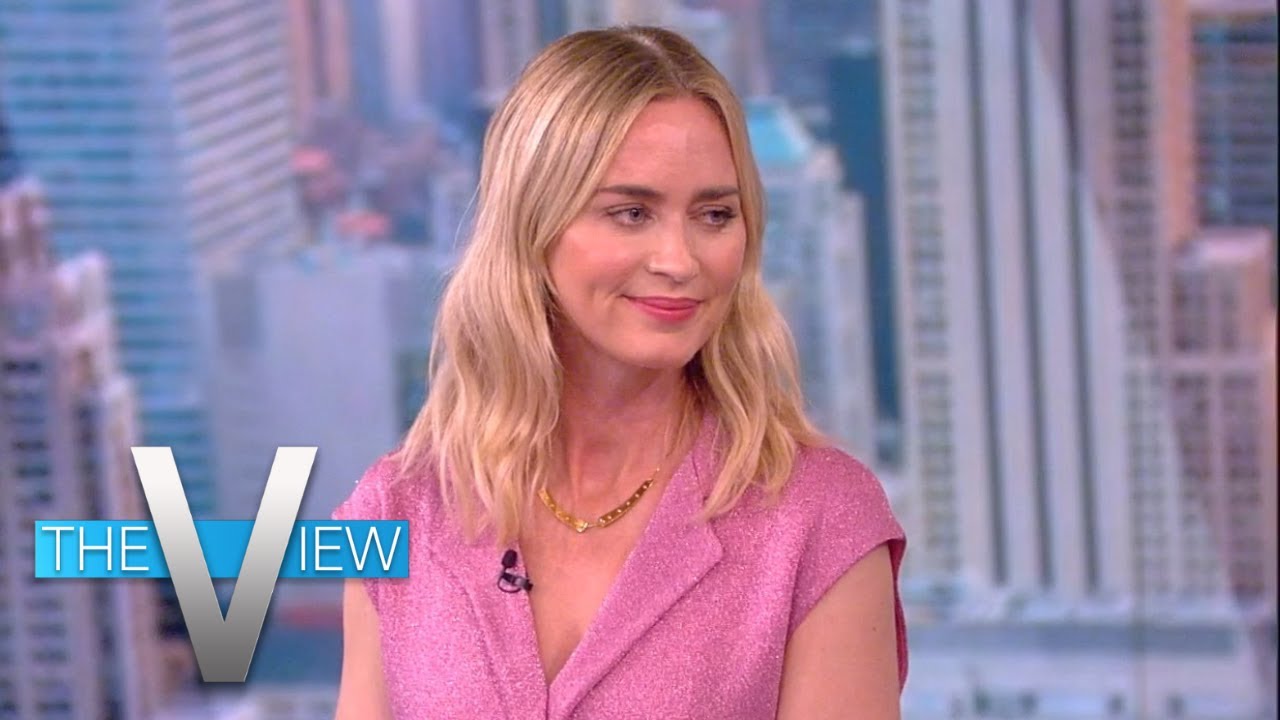 Emily Blunt on The View on Nov 10 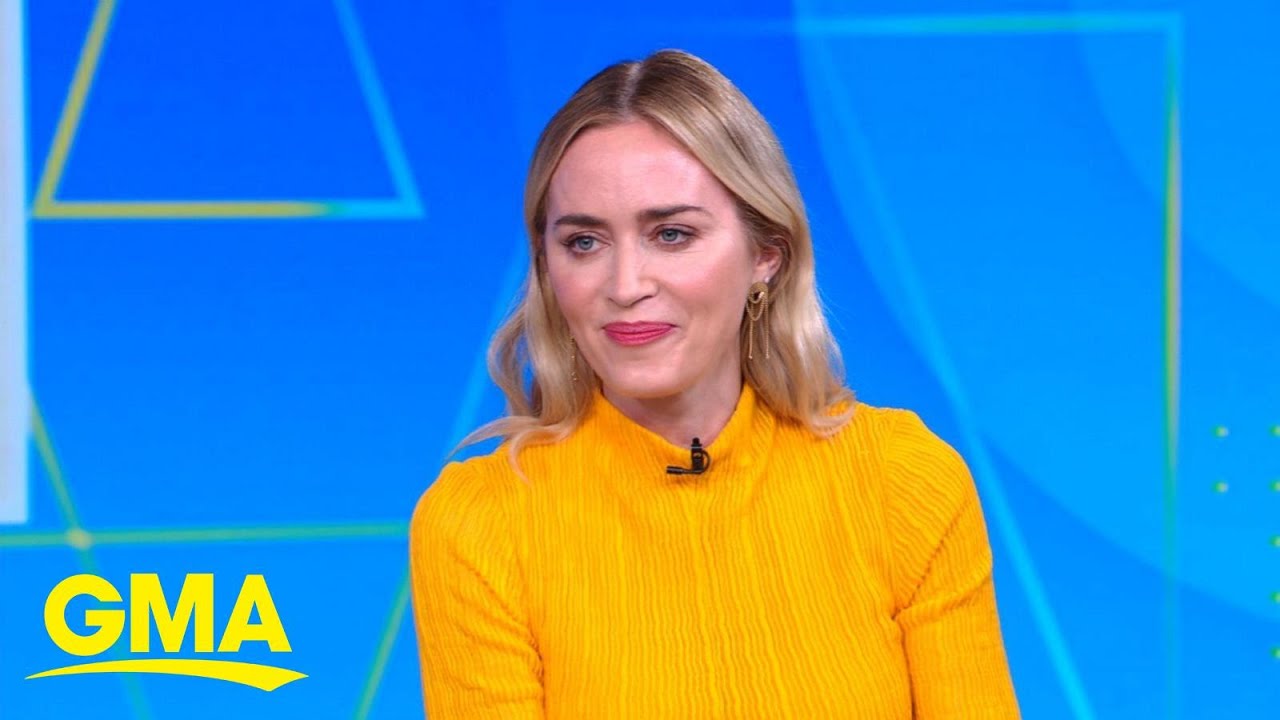 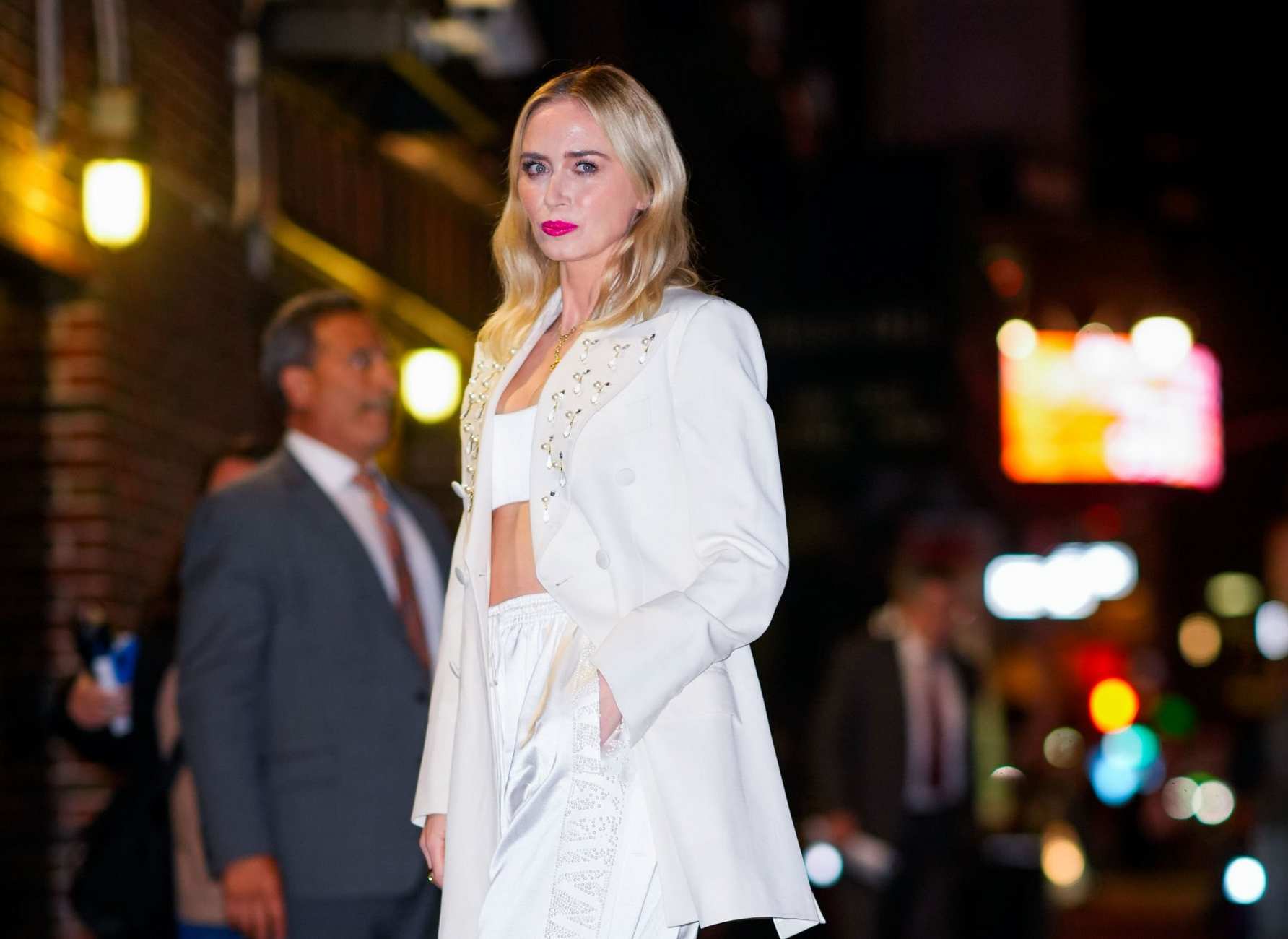 Emily Blunt at The Colbert Show on Nov 10